The latest exhibition at the Melbourne's City Museum at the Old Treasury Building is deeply disappointing. Confined to two cluttered rooms, with few actual exhibits and over-reliant on a series of text-heavy placards mounted on the walls, Spooks purports to document Melbourne's 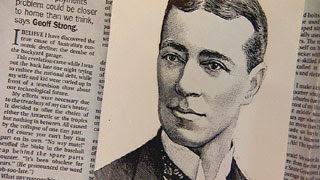 most haunted houses and other premises, including the Princess Theatre (home of the fabled Federici, pictured right, the ghost of a performer who died on stage, during the climax of a production Faust) and less-well known hauntings.

While the chills generated by reading tales of 'a shadowy figure that passes by office doors. As he moves his way around the building doors mysteriously open and close in progression down the long corridor...' are undeniable - especially because the ghost in question reputedly haunts the very building housing the exhibition (cue dramatic chords) - the exhibition itself lacks thrills.

The few objects on display (such as shards of pottery, a warder's truncheon from Old Melbourne Gaol, and a reproduction 19th century dress brought in to convey the visual look of a particular ghost) lack any real sense of connection to the exhibition. They also lack drama, as does the exhibition as a whole. Children will be bored by it, as the majority of textual information is both ponderously written, over-long and placed too high on the walls for kids to read comfortably; while I was both underwhelmed and disappointed. Perhaps a full moon tour of the Melbourne General Cemetary, or the Haunted Melbourne Ghost Tour might be more satisfying...?

Posted by richardwatts at 3:55 pm